I've recently found out something I thought lost, the text of a story published a few years ago on a literary magazine in USA (TLRW - The Literary Review on the Web). My friend and  writer Peter Selgin had insisted to translate the story since he had  liked it a lot (!). Then he submitted it to the review and... here it is. The story has been inspired by a true  fact... 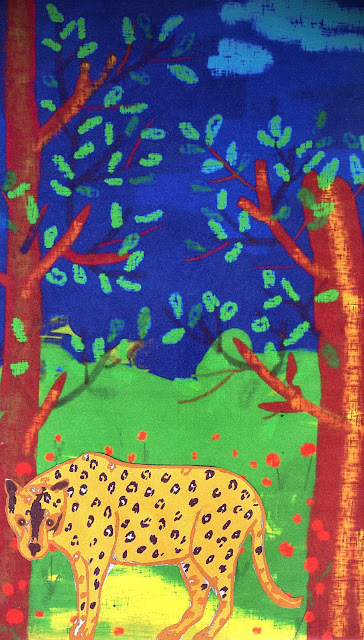 It all started with a small notice in a local newspaper, which - after some time -   took on the       proportions of a national news item:
PANTHER TERRORIZES LIVORNO

Hunt Commenced Four Days Ago.
Many Animals Attacked.
The panther was first seen by a driver in the district of Parrana San Martino. After raising its head from behind a hedge, the panther arched its back and stretched. It had already eaten a dozen chickens and slaughtered two dogs and several goats belonging to farms situated in the surrounding hills. The hunt was initiated soon thereafter, with participants including forest rangers and both urban and state police, as well as private citizens armed to the teeth for this singular safari. Bearing pistols, knives, and rifles loaded with tranquilizing darts, they combed an area of approximately twentyfive square miles. However, day after day, having seen neither hide nor hair of the beast, the hunters returned to their homes and barracks where, fearful of the near and present danger, they left the lights burning in their gardens and courtyards.
The Perfecture of Livorno sent warnings to Pisa, Grosseto, and Siena. Meanwhile experts arrived to examine the slaughtered dogs. They concluded that the killer must be an unusually large feline, agile and potent and able to jump over high enclosures, that then carried its pray far to consume their corpses in peace. According to the local police chief, it was probably an escaped exotic animal imported from Africa or Asia, and belonging to some collector, who abandoned it. As a matter of fact, two months earlier, at Castiglioncello by the sea, a hunter had reported seeing an enormous cat at the edge of the local highway, gripping the carcass of a pheasant in its teeth.


I was in my studio in front of the large glass window facing out into my back yard. Having tried in vain to sleep, I remembered some changes I needed to make in a report to the congress of hematology, and so I got up. I checked the windows to make sure they were secured against the storm. While doing so, I noticed the tree branches swaying under the influence of the cold winds and rains of that particularly bitter January. Having stood for a while at the foot of the staircase with ears pricked, listening to the sounds of night, I sat at my desk and bent my head over thirty pages riddled with scrawled and scratched-out notes.
I carried in my mind the exact program of the days to follow, and felt exhausted in advance by the precision and punctuality demanded by the routines of academic life. Over the last few months I’d lived that life as though it was a prudently calculated investment, measuring my energies and motives with the same fussy precision with which I had filigreed the text of my report with periods, commas, colons, and semi-colons. Even the asterisks (referring to meticulous experiments to underline their data and procedures) reminded me of conversations I’d been having with friends and acquaintances: explanations logical, justifications unimpeachable, and arguments so flawless they left no room for appeal. For my rigid and regimented way of life no one had ever chastised me, not even my mother, with whom I spoke by telephone twice a week, and who seemed happy to hear me so taken with my work and students. I found myself wondering if something or someone in this world might lift me off this chessboard of a life, if only long enough for me to forget the rules of the game.

(Translated from the Italian by Peter Selgin)

I'm a freelance illustrator based in Tuscany, Rome and Provence. Up to this point, I've published 5 children's books...